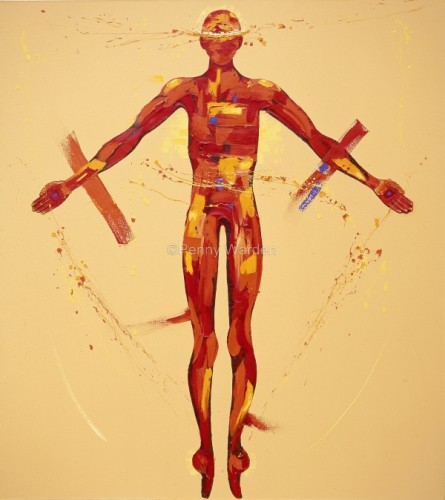 Radical life-size oil paintings of Jesus Christ are to go on permanent display in Blackburn Cathedral. The 15 abstract studies are planned as visual aids to faith and as a national tourist attraction.

The Dean of Blackburn, the Very Rev Christopher Armstrong, at the launch of the Stations of the Cross said:

“The Stations will be of national significance and compliment the already impressive stock of modern art at the Cathedral.”

“They will assist the Cathedral in its missionary mandate to tell the story of Christ’s last few hours to a puzzled and agnostic generation. I am convinced Penny Warden’s unique approach will help us continue this work very effectively,for these ‘Stations’ engage with people where they are, in all the conflicts and sorrows which life brings in the 21st Century.”

“This major and permanent exhibition of modern art is probably the most adventurous of its kind in any English cathedral,” said Canon Andrew Clitherow of Blackburn Cathedral.

The paintings are called ‘The Journey’ and portray the last journey of Christ to the crucifixion, traditionally marked by ‘Stations of the Cross’.
Canon Clitherow said the Blackburn paintings, which also feature Christ’s resurrection:

“The guide is written so that it will be of use to people who are already committed Christians, and also for those who are seeking to develop their understanding of God through the Christian faith, maybe for the first time.”

“We expect this series of paintings will attract people not only from Lancashire, but also from all over the North and even further afield, to come to Blackburn to ‘make the journey’ and see some pretty astonishing and very moving art.”

Berkshire artist Penny Warden, who produced the paintings following a successful exhibition in the Cathedral two years ago, said the new paintings would be “possibly controversial”. She said:

“They are very challenging; people won’t be able to ignore them.

“Christians who know the story will see it portrayed in a very modern way; it is very contemporary. And it will also challenge those who are not religious people.”

“They also place religious art where it should be, and where it always was – in religious places.”

“We all danceto a mysterious tune intoned in the distanceby an invisible player.”Albert Einstein'Charisma' Oil on Canvas 50cm x 100cm ...

You can dance anywhere, even if only in your heart. ~Author Unknown'Lace' Oil on Canvas 50cm x 100cm ...